Before there was Google there was Captain Fantastic And The Brown Dirt Cowboy.

To explain… For many an Elton fan in 1975, listening to the ten songs and poring through the detailed packaging of his ninth studio LP (and 12th album overall) was like being lovingly thrust into information overload regarding the history of Elton and Bernie Taupin’s formative years as a songwriting partnership in the late 1960s – a topic virtually unknown by the general public at the time. Each passing lyric line and every graphic image became another in a surplus of clues as to the pair’s experiences and expectations while they toiled at their craft before Elton’s first album, Empty Sky, was released in 1969.

For certain, if you were an Elton fan, this album took you down a rabbit hole and gave you the answers to questions you didn’t even know you had. And it gave them, more than 15 years before the World Wide Web was established, “from the end of the world to your town.” –

In honour of the 40th anniversary of the album’s release, here are our 10 Things You Need to Know About…

1) Captain Fantastic And The Brown Dirt Cowboy was released on vinyl LP, cassette and 8-track in the United States on May 19, 1975 (May 23rd in the UK) at a list price of $6.98. This meant most customers could expect to part with $5.99 at the cash register…or less if they were at a large-volume store like Sam Goody or Tower Records in Los Angeles.

chart at #1. This is something no other album (by any artist) had done before and was a testament to the incredible popularity Elton enjoyed, especially in the United States. It had in fact shipped gold, the Recording Industry Association of America (RIAA) certification for 500,000 units sold, based on retailer pre-orders alone.

The album stayed at #1 on Billboard for six weeks and then remained in the Top 5 before returning to the peak position once more in September. It remained in the Top 200 for over nine months. Eventually it would be certified triple platinum (for over 3 million sold) by the RIAA in 1993. In the UK it peaked at #2, staying on the album charts for 24 weeks, and is certified gold by the British Phonographic Industry.

3) The album’s autobiographical lyrics were written by Bernie between May and July 1974. Elton wrote the music in three different locations: England, the Caribou Ranch recording studio in Colorado and aboard the SS France ocean liner during a six-day voyage that Elton and most of his band took beginning on July 19 in Southampton, England. Later that fall British Vogue published “’My Day’ by Elton John,” which offered a rare glimpse into the journey to New York City:

“July 22, 1974…At 12:00 I go to the music room to write some new songs. I have only booked it for two hours and to my embarrassment have to eject the ship’s classical pianist. She, however, makes her way to another room directly above and commences battle. I decide to write an up-tempo number as most of the songs so far are slowsy. By 1 pm Meal Ticket is complete – very pleased with it. Play it to the band and they nod their approval.”

4) The album was recorded and mixed in running order at Caribou Ranch in August 1974 during a rare break in Elton and the band’s hectic tour schedule. Producer Gus Dudgeon later said that laying down the album in sequence was, “Probably the only time that’s ever been done. Good fun doing it that way – it helped us to judge the next track by the track we’d just worked on and it gave it a sort of natural momentum.” This summer session also was the first time that Elton used a new piece of technology on his piano. Dudgeon: “[The piano sound on] Bitter Fingers was a combination of an [Eventide] Harmonizer (we used that for the first time on that album – it was a new device that had just been brought in) and putting the piano through a Lesley cabinet…what you normally would feed a B-3 organ through.”

5) For the first time since 1971’s Friends, only one single was issued from an Elton album: Someone Saved My Life Tonight. This was because of the immense success of his past two non-album 45s, Lucy In The Sky With Diamonds and Philadelphia Freedom. Both were recorded during the Captain Fantastic sessions and each reached #1 in America.

Rolling Stone reviewer Jon Landau pointed out in his review of the album on July 17 that, “As long as Elton John can bring forth one performance per album on the order of “Someone Saved My Life Tonight,” the chance remains that he will become something more than the great entertainer he already is and go on to make a lasting contribution to rock.” At 6 minutes and 45 seconds, Someone Saved… remains Elton’s longest single to date. With the non-album track House Of Cards as its b-side and sporting a custom label based on the album art, it entered the Billboard Hot 100 Singles chart at #51 on July 5. It peaked at #4 in early September, just a week before Elton’s next single, Island Girl (from his pending Rock Of The Westies album) was released.

6) Although listed as two different tracks on the album, We All Fall In Love Sometimes and Curtains were recorded together. “The two songs were recorded as one complete piece all the way through,” Dudgeon explained in 1993. “But it was done in two takes. I remember that Neil Sedaka walked into the control room just as we began the second take. The band actually had just started the song as he walked in. And I thought, ‘Now, this is going to be interesting, to see what his reaction is.’ Because it’s nearly 11 minutes long. So it got to about nine minutes, and he came over to me and whispered, ‘My God, are they doing this all in one go or are they dubbing on?’ And I said [whispering], ‘No, it’s all in one go.’ He went, ‘Jesus, they’ve been going on for hours!’ 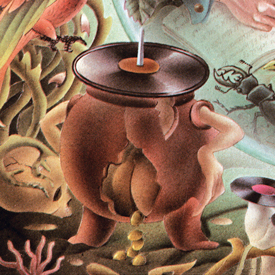 7) The album cover art by Alan Aldridge features images of Elton, Bernie and the band (animated elements of the artwork were used in a 30-second television commercial celebrating the release of the album). The front panel shows Elton breaking out of a dangerously dreary cityscape astride his piano while the back of the cover shows Bernie writing in a somewhat protected pastoral bubble. Keen-eyed fans can also identify Elton’s first music publisher Dick James and Bernie’s then-wife Maxine in the intricate illustration. Even more subtle is a visual reference to the This Record Company, one of Elton’s early record labels, which constructed their unofficial slogan, “Turning shit into hits…” out of anagrams of the word “this.”

8) The elaborate album packaging also included a pair of booklets, one called “Lyrics” and the other “Scraps,” that contained a plethora of items from Elton and Bernie’s personal collections as well as the lyric to a song not included on the album called Dogs In The Kitchen. Bernie was very involved in the booklets’ concepts and the collection of memorabilia, even going so far as to provide the cardboard suitcase which he had used on his journeys between staying with Elton near London and his home in Lincolnshire, for use in the “Scraps”center spread photo.

9) Captain Fantastic was a landmark Elton album for everyone involved in its creation. As Gus Dudgeon put it, “Unquestionably, musically, the band were absolutely at their peak and they’d never played that well across a whole album. The songs were great anyway, but the performances are so ‘on the money.’” And guitarist Davey Johnstone explains, in an exclusive interview with EltonJohn.com*, “It was really cool. I knew there was something special. This was going to be an autobiographical album, it was going to be the story of what happened, and we weren’t concerned at all about ‘commerciality.’ It was a really fun album to make.”

10) In a 2013 interview with Cameron Crowe for Rolling Stone, Elton said, “Every lyric on Captain Fantastic And The Brown Dirt Cowboy was about Bernie and me, about our experiences of being able to make songs and make it big. … In a way, years later, I ended up being Captain Fantastic and he ended up the Brown Dirt Cowboy: Here, I’m living my fabulous lifestyle, collecting paintings, and Bernie is interested in horses and bull riding and shit like that. We became those characters. Who was to know?”

Source: 10 Things You Need to Know About Captain Fantastic And The Brown Dirt Cowboy :EltonJohn.com

One fan’s account of attending Elton’s “Midsummer Music” Extravaganza at Wembley Stadium, London in June, 1975 at the following link:

Check out the Captain Fantastic Collectables at this link:

“MidSummer Music,” they called it, and as you can see from the poster, it was some event. 40 years ago today, on June 21, 1975, Elton John headlined a huge, all-day concert at Wembley Stadium for a sellout crowd of 72,000 — and one of the most memorable open-air events of the decade turned into a triumph for the Beach Boys.

In a wonderful TV commercial that ran ahead of the day, here’s Elton explaining all about it — and apparently playing football with Joe Walsh and Chaka Khan…

Introduced by BBC Radio 1 DJ Johnnie Walker, the proceedings were opened as early as 11.30am on that Saturday morning by British rock outfit Stackridge. They had recently become the first group signed to Elton’s new Rocket label, for whom their fourth album ‘Extravaganza’ had been released five months earlier, in January.

Next up, bringing some funky soul to the proceedings, were American R&B favourites Rufus, fronted by the aforementioned Chaka, who were touring their third album ‘Rufusized,’ featuring the US hit ‘Once You Get Started.’ Walsh was still a solo artist at the time, but was soon to join the Eagles, who followed him onto the Wembley stage. The appearance set up their first UK singles chart entry soon afterwards with ‘One Of These Nights,’ and Walsh joined them for a cover of Chuck Berry’s ‘Carol.’

In the first half of his set, Elton played hits like ‘Rocket Man,’ ‘Philadelphia Freedom’ and ‘Bennie and the Jets,’ but then chose to perform the whole of his new album ‘Captain Fantastic and the Brown Dirt Cowboy,’ which had been released on May 19 and was spending a third week at No. 2 as he played the show.

But many of his fans were unfamiliar with the songs, and he was widely perceived to have been upstaged, in the nicest possible way, by the second-on-the-bill Beach Boys, who came to London on a wave of nostalgic popularity in the US and seized the chance to bring it with them across the Atlantic. 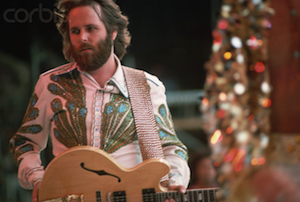 21 Jun 1975, London, England, UK — Carl Wilson of The Beach Boys stands on stage at Wembley Stadium during a concert with Elton John and the Eagles. — Image by © Henry Diltz/CORBIS

With their double disc compilation ‘Endless Summer’ having topped the American chart the previous autumn and a second retrospective, ‘Spirit Of America,’ just going gold, the Beach Boys were well and truly back in style, if largely for their 1960s catalogue. It didn’t even matter that they hadn’t appeared on the UK album chart for more than two years.

In a hit-packed set that started with ‘Wouldn’t It Be Nice’ and ended with ‘Fun Fun Fun’ some 22 songs later, the California vibes rang out from Wembley Stadium, and the Beach Boys enjoyed one of the high points of their international career.