“ONCE UPON A TIME…IN HOLLYWOOD”: What Real Movies Inspired Rick Dalton’s Fake Films?

Posted on January 6, 2020 by Cosmic Dwellings

Rick Dalton, the actor played by Leonardo DiCaprio in “Once Upon a Time…in Hollywood,” does not exist. But he feels like he could, because director Quentin Tarantino has mapped out an entire filmography for Dalton that plausibly places him within a changing Hollywood in 1969.

The fake movie scenes and posters Tarantino has created for Dalton are a portrait of a certain type of actor in the ’60s: a handsome, ruggedly masculine type who would soon be replaced as the default Hollywood leading man by a more androgynous aesthetic inspired by the emerging counterculture. Tarantino has said on several occasions that Rick Dalton’s screen persona and his career trajectory are an amalgam of guys like Steve McQueen, George Maharis, Vince Edwards, Edd Byrnes, Ty Hardin and more. And if you have forgotten who some of those actors are, that’s essentially Tarantino’s point.

“What he’s dealing with is even more than the TV and movies transition, as big a deal as that is, especially to him. The culture has changed underneath him, the entire Earth has gone topsy-turvy as far as he’s concerned, as far as a whole era of leading men is concerned,” Tarantino said on the “Pure Cinema Podcast,” which looks at the programming at Tarantino’s New Beverly Cinema in Los Angeles. “They spent their careers running pocket combs through their pompadours. Nobody is putting pomade in their hair anymore, nobody is wearing pompadours any more.”

Also Read: Tarantino’s ‘Once Upon a Time in Hollywood’: How the Stars Compare to Real-Life Characters (Photos)

The roles Dalton takes throughout “Once Upon a Time…in Hollywood” aren’t just for color: they reflect his character and how he looks at himself as an actor. Thankfully, Tarantino has taken most of the guess work out of deciphering the inspirations behind Rick Dalton and his filmography and detailed the inspirations for each of Rick Dalton’s fake movies that appear in the film and in special promotional posters for “Once Upon a Time…in Hollywood.”

Here’s a rundown of each of those fake films and the real movies and shows that Tarantino based them on:

Before Steve McQueen was in “Bullitt” and “The Great Escape,” he was a TV cowboy. Tarantino said Rick Dalton’s “Bounty Law” and McQueen’s “Wanted: Dead or Alive” were “pretty much identical shows” and that they even aired at the same time, sparking fan magazine rivalries in his alternate Hollywood universe. But whereas McQueen successfully transitioned from TV to film, Dalton couldn’t do the same, and now he’s stuck guest starring on other people’s TV shows as the bad guy who gets beat up by the new kid on the block.

Here’s a screenshot from the “Wanted: Dead or Alive” opening titles for reference:

Also Read: Once Upon a Time in Hollywood, Did Bruce Lee Really Teach Sharon Tate How to Fight?

“Tanner” is one of Rick Dalton’s early films, a Western he made during the hiatus of filming “Bounty Law” that he hoped would launch him to movie stardom. And it’s most closely based on the 1958 film “Gunman’s Walk” starring Tab Hunter, another handsome actor that Tarantino said was a loose model for Dalton. Tarantino even included the Western as part of a curated film marathon that’s airing on the Sony Movie Channel in conjunction with “Once Upon a Time…in Hollywood.”

Here’s the 1958 theatrical poster for “Gunman’s Walk” for comparison: 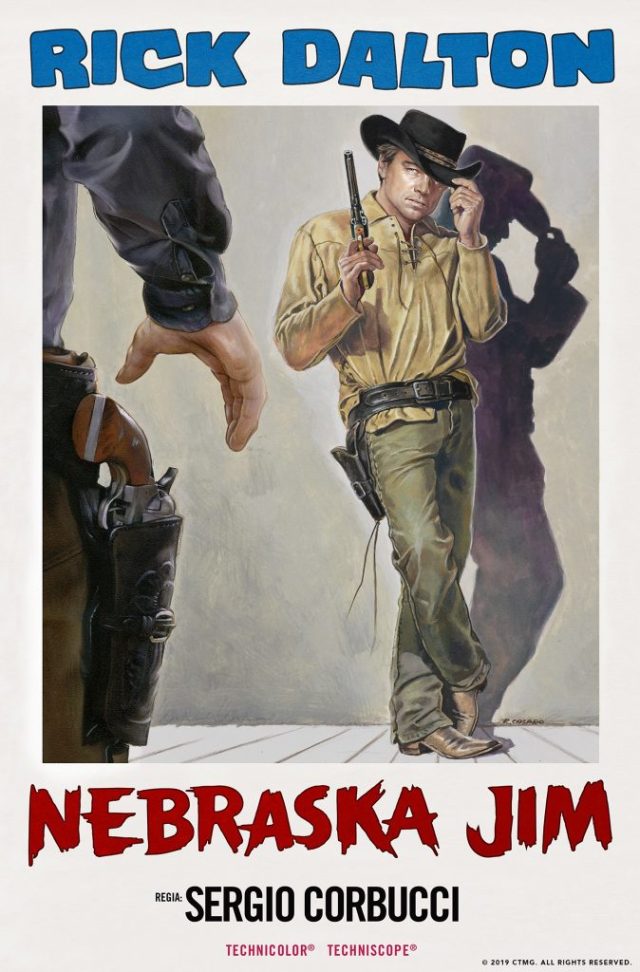 “Nebraska Jim” is a spaghetti western directed by Sergio Corbucci, who Al Pacino’s character in the film refers to as “the second-best director” of the genre (behind Sergio Leone, almost certainly). But of course Corbucci is a real director who Tarantino adores. His 1966 film “Django” helped inspire the title to “Django Unchained,” and a poster for the 1968 film “The Mercenary” appears in the theater visited by Sharon Tate in “Once Upon a Time…in Hollywood.” Corbucci’s “Navajo Joe” however stars a young Burt Reynolds as a Native American warrior who seeks revenge on a group of outlaws who savaged members of his tribe. The title “Nebraska Jim” also veers closely to another 1966 film called “Ringo del Nebraska” starring Ken Clark.

Check out the posters for “Navajo Joe” and “Ringo del Nebraska”: 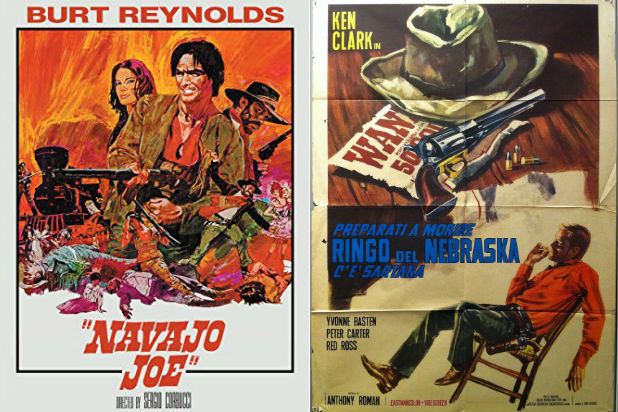 Also Read: ‘Once Upon a Time…in Hollywood’ Premieres to $5.8 Million at Thursday Box Office

In “Once Upon a Time…in Hollywood,” Dalton’s “Operazione Dyn-o-Mite” is described as an Italian, spy movie ripoff of James Bond as directed by Corbucci. And though Corbucci was known for his spaghetti westerns, he took a departure from the genre and make a spy movie called “Bersaglio mobile,” retitled in the U.S. as “Moving Target” and “Death on the Run.” Tarantino on the Pure Cinema podcast said he directly lifted the car chase from “Moving Target” but subbed in DiCaprio’s face over Hardin’s. And in the fake movie poster for “Operazione Dyn-o-Mite,” DiCaprio’s outfit is strikingly similar to what Hardin wore in the film.

Here’s an American “Death on the Run” poster for comparison: 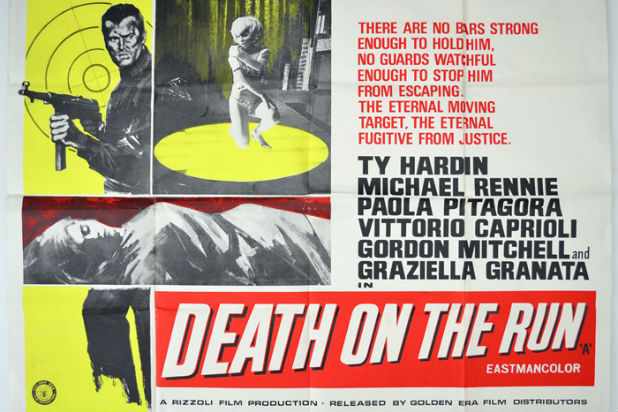 “Kill Me Now Ringo, Said the Gringo” – Giuliano Gemma in
“A Pistol for Ringo”

Tarantino has fun with the rhyming title of Dalton’s “Kill Me Now Ringo, Said the Gringo,” also known by its Italian title, “Uccidimi Subito Ringo, Disse il Gringo.” Tarantino’s New Beverly Cinema wrote a blog post that says the title is inspired by two films starring Giuliano Gemma called “A Pistol for Ringo” and the sequel “The Return of Ringo.”

Check out the posters for “A Pistol for Ringo” and “The Return of Ringo” below: 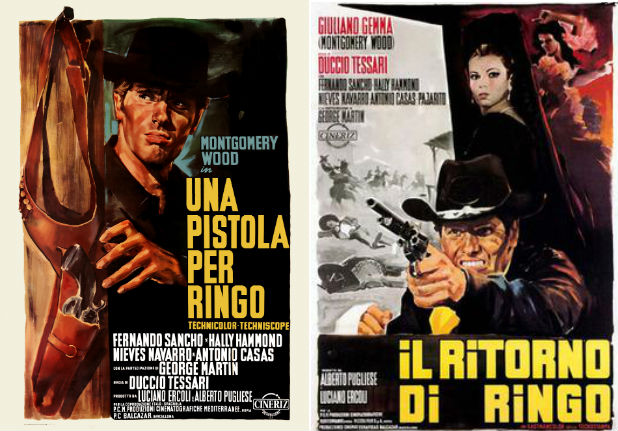 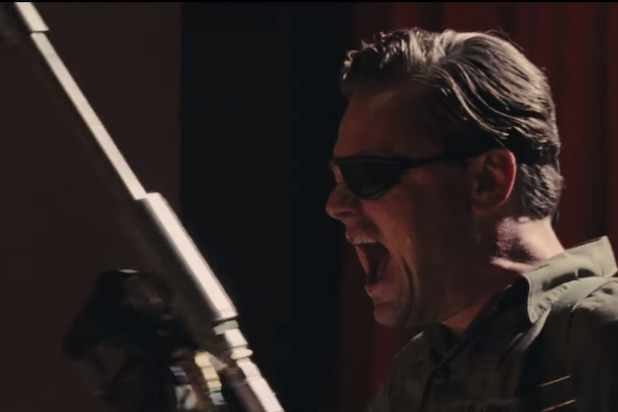 Another western in Dalton’s spaghetti western period in Italy, Tarantino said on the “Pure Cinema Podcast” that the fictional plot of “Red Blood, Red Skin” is inspired by “Land Raiders,” which is about an outlaw who commits a string of robberies and then places the blame on a tribe of Apaches, sparking a Native American war. Tarantino imagines that Dalton stars in the film alongside Telly Savalis, who also appears in “Land Raiders,” and Tarantino said he created the fake poster seen in the movie by replacing Maharis with Dalton in the Spanish poster for “Land Raiders.”

Here’s a shot from “The Land Raiders”:

“The 14 Fists of McCluskey” – “Inglourious Basterds”

This movie in Dalton’s filmography isn’t necessarily a direct surrogate of an existing film, though the concept, a war film set across enemy lines during World War II, feels similar to movies like “The Secret Invasion” from Roger Corman and starring Edd Byrnes or “The Dirty Dozen.” However, the scene staged in “Once Upon a Time…in Hollywood” of Dalton torching a room full of Nazis with a flamethrower is eerily similar to the climax of Tarantino’s other revisionist period piece, “Inglourious Basterds,” which saw the Basterds torch a theater filled with Nazi bigwigs and also starred “Once Upon a Time’s” Brad Pitt.

We don’t have an image of the fictional film, but up above you can see shot from that incredible “Inglourious Basterds” scene to tide you over.

Source: Real Movies That Inspired Fake ‘Once Upon a Time in Hollywood:’ Films?