GEORGE HARRISON: “All Things Must Pass” – An Appreciation – uDiscover

Posted on January 3, 2016 by Cosmic Dwellings 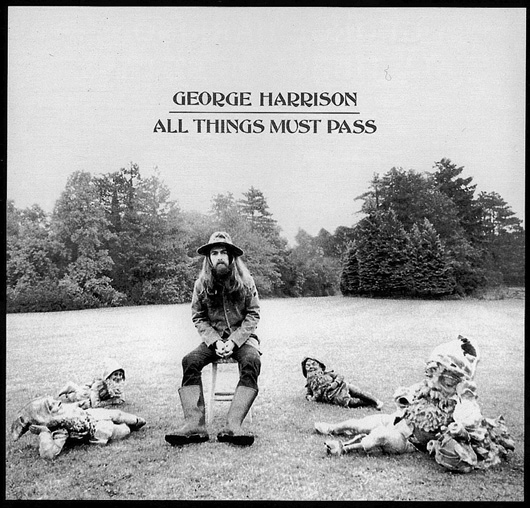 Classic album is a term that’s used way too much when describing records from the golden era of rock music; of course, one person’s classic album is another’s long-forgotten record, but we think that without fear of contradiction George Harrison’s All Things Must Pass is a CLASSIC album…

45 Years ago it made the Billboard album charts on 19 December 1970 and two weeks later it was No.1. There’s an old adage in the music business that talks of, ‘the difficult third album’, well this was George’s third solo album and there’s nothing difficult about it, every track is worthy of its place, there’s no filler, just killers… and it was originally released as a triple album when it came out on 27 November 1970. Ben Gerson of Rolling Stone described the sound as “Wagnerian, Brucknerian, the music of mountain tops and vast horizons,” and who are we to disagree? Truth is George considered this to be his first solo album proper, having originally released his movie soundtrack, Wonderwall Music and his synthesizer album, Electronic Sound.The genesis of All Things Must Pass can be said to have begun with George’s visit to America in November 1968 when he established his long-lasting friendship with Bob Dylan while staying in Woodstock. George’s songwriting output was increasing and becoming increasingly more self-assured, for example he co-wrote ‘Badge’ with Eric Clapton for Cream’s Goodbye album that came out in early 1969. George’s involvement with Apple Record’s signings, Billy Preston and Doris Troy in 1969, as well as his tour with Delaney and Bonnie that included Eric Clapton, Leon Russell, Dave Mason, Bobby Whitlock, Carl Radle and Jim Gordon, began to influence his writing with elements of gospel and the kind of sounds that we have come to call ‘Americana’. 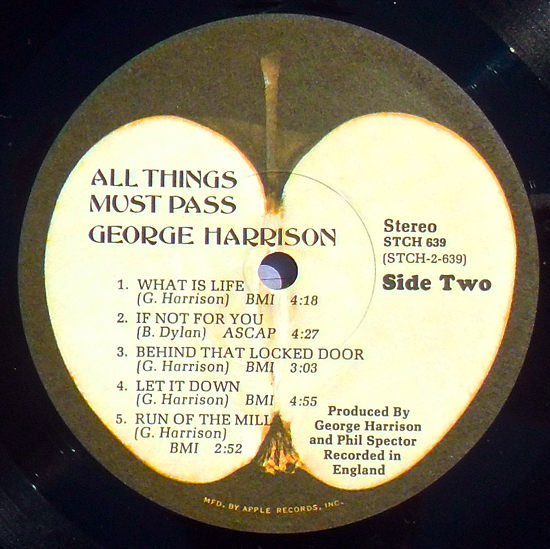 George’s spiritual journey saw him involved with the Hare Krishna movement that would also become another vital piece in the jigsaw of sound that makes up All Things Must Pass. In February 1969, on his 26th birthday, George recorded a demo of his song, ‘All Things Must Pass’, along with ‘Old Brown Shoe’ and ‘Something’. The latter two songs went on to be recorded by the Beatles and for whatever reason ‘All Things Must Pass’ was not recorded by the Beatles; the song is based on a translation of part of chapter 23 of the Tao Te Ching, “All things pass, A sunrise does not last all morning. All things pass, A cloudburst does not last all day.”

A month earlier George also made a demo of ‘Isn’t It A Pity’, one of the standout tracks on All Things Must Pass, but this song too failed to make the cut for a Beatles album. It wasn’t until early 1970 that initial preparatory work began on George’s solo album; it was at this time that he played producer Phil Spector demos of songs that he had been writing while with the Beatles.

Some of these songs went back as far as 1966, specifically, ‘Isn’t It a Pity’ and ‘Art of Dying’ and he had written ‘’I’d Have You Anytime’ with Bob Dylan in late 1968 while in Woodstock. George had tried to get the Beatles interested in ‘All Things Must Pass’, ‘Hear Me Lord’ and the beautiful, ‘Let It Down’, during rehearsals for the Get Back album, but the other Beatles seemed not to be interested. ‘Wah-Wah’ and ‘Run of the Mill’ both dated from early 1969, while ‘What Is Life’ came to George while he was working with Billy Preston on his album, That’s the Way God Planned It. ‘Behind That Locked Door ‘ was written in the summer of ’69, just before Dylan’s performance at the Isle of Wight Festival and he started to write the epic, ‘My Sweet Lord’ in Copenhagen while on tour with Delaney and Bonnie in late 1969.

It was while on tour with Delaney Bramlett that the American asked George to play slide guitar and his ‘I Dig Love’ is an early experiment with a sound that George came to make his own. Other songs on All Things Must Pass were all written in the first half of 1970, these include ‘Awaiting on You All’, ‘Ballad of Sir Frankie Crisp (Let It Roll)’, a tribute to the original owner of George’s home, Friar Park and ‘Beware of Darkness’. Shortly before the sessions for his album began, George was at a Dylan session in New York, which is where he heard, ‘If Not for You’ and in turn George was inspired to write the Dylanesque, ‘Apple Scruffs’ as the All Things Must Pass sessions were winding up, it was in tribute to the girls who hung around outside Apple Corps offices where he was working, or Abbey Road Studios in the hope of meeting a Beatle.

Recording the album began in late May 1970 and such was the frustration within George at being unable to get his songs on Beatles’ albums that it is of little surprise that there were so many on All Things Must Pass. The third record included in the original triple album is entitled Apple Jam and four of the five tracks – ‘Out of the Blue’, ‘Plug Me In’, ‘I Remember Jeep’ and ‘Thanks for the Pepperoni’ – are i instrumentals put together in the studio. According to George “For the jams, I didn’t want to just throw [them] in the cupboard, and yet at the same time it wasn’t part of the record; that’s why I put it on a separate label to go in the package as a kind of bonus.” The fifth track, It’s Johnny’s Birthday was a present for Lennon’s 30th and it is sung to the tune of Cliff Richard’s ‘Congratulations’.

Such is the big sound of All Things Must Pass that it is hard to be precise as to who appears on what track. Aside from those already mentioned there is Ringo Starr, Billy Preston, and German bassist Klaus Voormann who also did the artwork for the cover of the Beatles’ Revolver album. Members of Apple band, Badfinger were included, helping to create the wall of sound effect on acoustic guitars, and besides future Derek and the Dominos’ keyboard player Bobby Whitlock the other principal keyboardist was Gary Wright who had been a member of Spooky Tooth and later in the 1970s had some big hits in America. Other keyboard players included, Tony Ashton, and John Barham who both played on Wonderwall Music 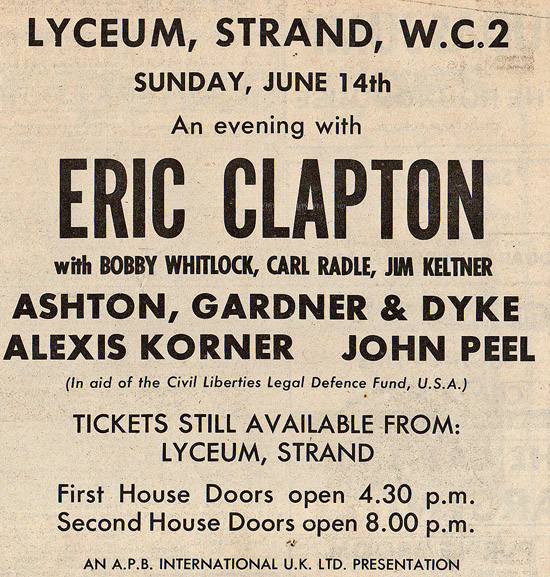 Eric Clapton, Bobby Whitlock, Jim Gordon and Carl Radle (not Jim Keltner as the advert says) played London’s Lyceum in the Strand on Sunday 14 June 1970 and decided shortly before going on stage to call themselves, Derek and The Dominos. Earlier in the day they were at Abbey Road for an All Things Must Pass session when they cut ‘Tell The Truth’ that became Derek and The Dominos first single release in September 1970. The b-side of which was ‘Roll It Over’, recorded at an All Things Must Pass session on 25 June and this included George along with Dave Mason of Traffic on guitar and vocals.

Originally George had thought it would take just two months to record All Things Must Pass but in the end recording lasted for five months, not finishing until late October. George’s mother was ill with cancer during the recording and this meant that he needed to head back to Liverpool on a regular basis to see her; she died in July 1970. Phil Spector also proved somewhat unreliable and all this led to George himself doing much of the production work himself.

Final mixing of the record started at the very end of October in New York City with Phil Spector. George was not entirely happy with what Spector did, but nothing can take away from the brilliance of this record that still stands up to the test of time. Tom Wilkes designed the box to hold the three LPs and Barry Feinstein took the iconic photos of George and the four garden gnomes on the grass in front of Friar Park.

Scheduled for release in October, the delays meant it came out in America on 27 November 1970 and three days later in the UK. The first triple album by a single artist, it captivated audiences everywhere, entering the Billboard album chart in December it spent 7 weeks at No.1 in America starting with the first chart of 1971. In the UK it only made No.4 on the ‘official’ album chart, although it topped the NME’s chart for 7 weeks. George’s lead single from All Things Must Pass was, ‘My Sweet Lord’ and it topped the singles chart on both sides of the Atlantic.

As time passes we have come to love this amazing record even more. It is the kind of record that says so much about what made music so vital as the 1960s became the 1970s. It is full of great songs, and lyrics that not only meant something then but still resonate today. As future decades come and go, and new generations of music lovers look back, this is the kind of record that will take on almost mythical status. It’s one thing being able to read about its making, it’s quite another thing to allow it to envelop you, to caress you and to make you feel the world is a better place in which to live having listened to it.

All Things Must Pass is George’s spiritual high, truly a classic and unquestionably one of the greatest albums ever made…triple, double or single.

All Things Must Pass has been remastered for 2014 and is included in George Harrison’s The Apple Years 1968-1975 box set.

Source: All Things Must Pass – An Appreciation – uDiscover