Posted on January 7, 2016 by Cosmic Dwellings 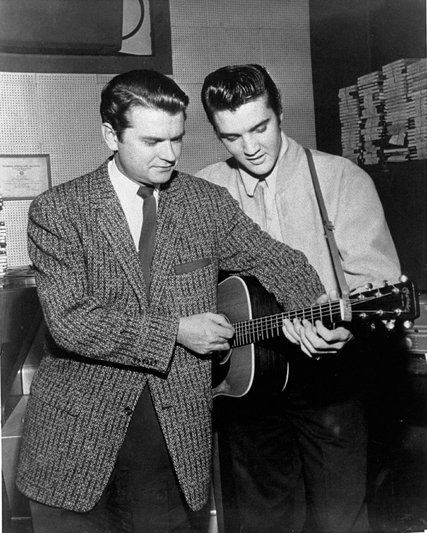 Five hundred forty-one pages into Peter Guralnick’s 763-page biography of Sam Phillips, the impresario enshrined in the subtitle as “the man who invented rock ’n’ roll,” we get the moment when many people probably saw Phillips for the first time. It was the night of May 15, 1986, a few months after he had been inducted into the charter class of the Rock and Roll Hall of Fame for having produced the first recordings by Elvis Presley, Jerry Lee Lewis, Johnny Cash and Carl Perkins, among others, more than 30 years earlier. Phillips was appearing as a guest on “Late Night with David Letterman,” and he was behaving strangely, deflecting questions with an indifferent glare or changing the subject to ask how Letterman could be so successful with such bad teeth. Letterman, trying to keep things under control and failing, asked: “Now, Sam — now tell me about the early days there at Sun Records. What kind of a sound were you trying to establish there?”Phillips fiddled with his bracelet, stared at Letterman and repeated the question in his lumbering Tennessee drawl.Letterman, visibly frustrated, prodded him: “Or would you just record anybody who came through?” Phillips leaned slowly toward Letterman’s face and said, “Why certainly, ­David.” Nearly 30 years after that show aired, we finally get lucid answers to the not inconsequential questions of how and why Sam Phillips led an ad hoc assemblage of unknown and untested poor young musicians to combine the sounds of blues and country music, harnessing a raw carnality to make what would become known as rock ’n’ roll. Guralnick, a veteran scholar of vernacular American music whose eight previous books include a majestic and definitive two-volume biography of Elvis Presley, first met Phillips in 1979 (for an interview for The New York Times), and he interviewed him many times over the ensuing 24 years before Phillips’s death in 2003. Guralnick draws from his deep mine of knowledge about Phillips and his world — a mine with passageways to some dark places — to produce a book so thoroughly steeped in its subject that it is almost an autobiography in the third person. As Phillips admitted proudly to Letterman, the doors of his physically humble but grandly ambitious studio in Memphis were open — if not quite to anybody who came through, then to a great many people who, by virtue of their inexperience or unconventionality, might not have been so welcome at larger, more commercially oriented record companies. “The very foundation of Sam’s story,” in Guralnick’s view, was Phillips’s belief in “the vast, untapped talents of those who had been ignored, set aside, scorned and reviled by a world that, without even knowing it, was waiting for the bestowal of their gifts.”
The artists in the raw whom Phillips sought and cherished — “untried, untested, unspoken-­for people,” as Guralnick writes in words that echo through the pages of his book — had “an eloquence and a gift that sometimes they did not even know they possessed.” That is to say, neither the musicians themselves nor their public necessarily saw the value of the music Phillips recorded until Phillips interceded to enlighten them all.
This conception of Phillips as a quasi-­messianic figure, a charismatic visionary of the American vernacular, is the driving idea of Guralnick’s biography. Only from artists who were “pure,” “unspoiled” and “raw” could Phillips “get the results he was looking for.” It is essential to this scheme, of course, that Phillips be the active element, the one with the vision, grooming naïfs from whom he alone could extract golden results. As Guralnick describes the canonical first sessions by Presley, at which Elvis, the guitarist Scotty Moore and the bassist Bill Black break away from the romantic ballads they had been playing for hours to mess around with a blues tune called “That’s All Right” — originally recorded by Arthur (Big Boy) Crudup in 1946 — the sound they made “was the very essence of everything Sam had dreamt of but had never been able to fully imagine.”

The proposition that Presley’s music began with Sam Phillips’s dreams, fulfilled through his agency as a talent scout and record producer, lays the foundation for the inflated subtitle of this book. In the romantic image of dreams begins the idealization of Phillips as the man who not only discovered rock ’n’ roll but also carries responsibility for it.

Like many books about the early history of rock, including the first volume of Guralnick’s biography of Presley, “Sam Phillips” gives due attention to the racially hybrid character of the music. Quoting Phillips in his new book, Guralnick relays how the singer and the producer together crossed far over “the color line.” Elvis sang an idiosyncratically countrified, hypersexed version of rhythm and blues, a music that had been invented (not discovered) by African-American musicians in the rural South, and he did so with both palpable admiration for it and true affinity with it, as a poor Southerner.

Yet, as we rarely learn in books about rock, including Guralnick’s latest, the color line had been fairly well crossed long before Sam Phillips recorded white boys like Elvis, Jerry Lee Lewis and Carl Perkins singing songs originally recorded by African-Americans. From the era of Stephen Foster, the white popularizer who produced pop hits on sheet music by appropriating and adapting “plantation songs” for minstrel shows, American popular music has been a racial amalgam rooted, elementally, in black expression. In the generation immediately preceding Elvis — and Little Richard, Fats Domino and Chuck Berry — American teenagers of all races were swing-dancing to the hits of the big bands. Swing, like rock ’n’ roll, was essentially a black invention hybridized as it was taken up by musicians and fans of all colors.

Undeterred by humility, Phillips was a great talker and a good-looker in full command of his gifts, at least in his prime. At one point in his “Late Show” appearance, Letterman shows Phillips a photograph of Elvis teaching him how to finger a chord on the guitar, and Phillips says, “Gregory Peck ain’t got a damn thing on me in that photo, has he?” He attracted women easily and did not decline the attention, carrying on several extramarital affairs with women involved in his various business ventures in recording and radio broadcasting. Guralnick handles these incidents matter-of-factly, without judgment or prurience. Similarly, he deals squarely but briskly with the debilitating bouts of anxiety and other psychological problems Phillips faced early in his professional life, issues that called for multiple hospitalizations and treatments of electroshock therapy.

At one point in their long association, Guralnick and Phillips had some conversations (described in this book) about collaborating on an as-told-to memoir. They abandoned the idea, Guralnick says, though the spirit of literary companionship infuses the work Guralnick ended up doing. Most of the book is written from Phillips’s point of view in language often designed to emulate Phillips’s speech: “Sam couldn’t really blame him for that. Hell, that was just business.” Or, in reference to an early business dealing: “The Bihari boys might think they were the only game in town, but he’d be damned if he’d be yoked to those pissants for life.” You could practically use a “replace” command to turn every “he” to an “I,” and have Sam Phillips’s autobiography, notwithstanding the sections about how Guralnick became friends with Phillips’s son Knox and grew closer and closer to the elder Phillips.

“This is a book written out of admiration and love,” Guralnick states frankly in an author’s note. As such, it honors Sam Phillips elegantly, by devoting itself to the one subject Phillips seemed to admire and love as much as he did ­music: Sam Phillips himself.