Posted on January 8, 2016 by Cosmic Dwellings

It’s hard to picture Elvis Presley without a guitar in his hand.From his iconic first album cover to his many movies, from the ’68 Special to “Aloha from Hawaii,” from Graceland to Vegas, Elvis always had a guitar nearby, and he was always ready to play. He enjoyed playing both the guitar and bass guitar.Elvis received his first guitar when he was 11, and for many years, that was his only guitar. But as he grew older – and eventually became the King of Rock ‘n’ Roll – he started collecting guitars, and many of them are part of pop culture history. Here are a few of the guitars made famous by The King: 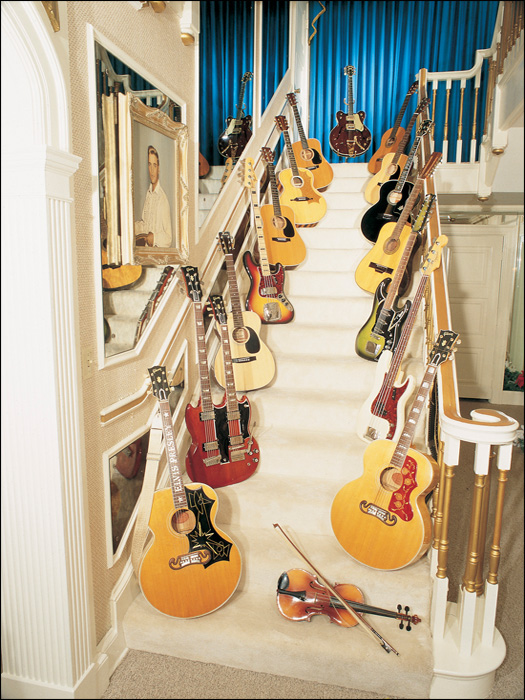 Elvis used this guitar at many concerts, including in Tampa, Florida, where this photo was taken, and at the Overton Shell (now Levitt Shell) in Memphis.

This guitar is the one Elvis is playing on the cover of his first album. It’s also well-known for its gorgeous leather cover, handmade by an employee at the music store where Elvis purchased the guitar. 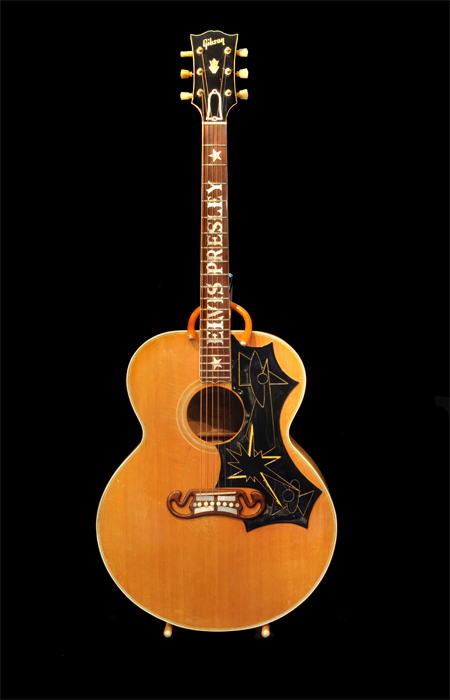 This guitar definitely looks like it belongs to a member of rock ‘n’ roll royalty.

Elvis loved this guitar and used it often. He used it in many of his 1957 concerts and appearances.

After returning home from the Army, he asked his guitarist Scotty Moore to send the well-worn guitar out to be refurbished. The work wasn’t done in time for Elvis’ March 20 recording session in Nashville, so he was given a brand-new 1960 J200 that looked almost identical.

Meanwhile, the 1956 model got a beautiful facelift: Gibson replaced the red pick guard with a new black one, and Elvis’ name was inlaid on the finger board. The stylish new guitar was debuted in publicity shots for “Wild in the Country” and can be seen in “Elvis: That’s The Way It Is.” He loved the 1960 J200, too, so he kept it. He used it in the ’68 Special and many live performances.

These guitars were favorites of the king. They’re both part of the permanent archival collection at Graceland. 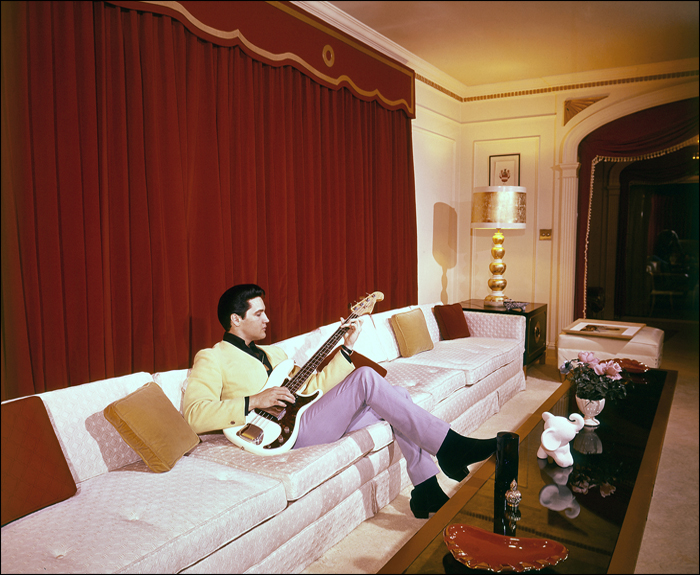 Even in his free time, Elvis made music.

Many fans know this guitar as the one Elvis is seen playing in Graceland’s living room in this March 1965 photo.

This pretty guitar can also be spotted in his film “Spinout”.

But maybe the most famous guitar seen in “Spinout” is the… 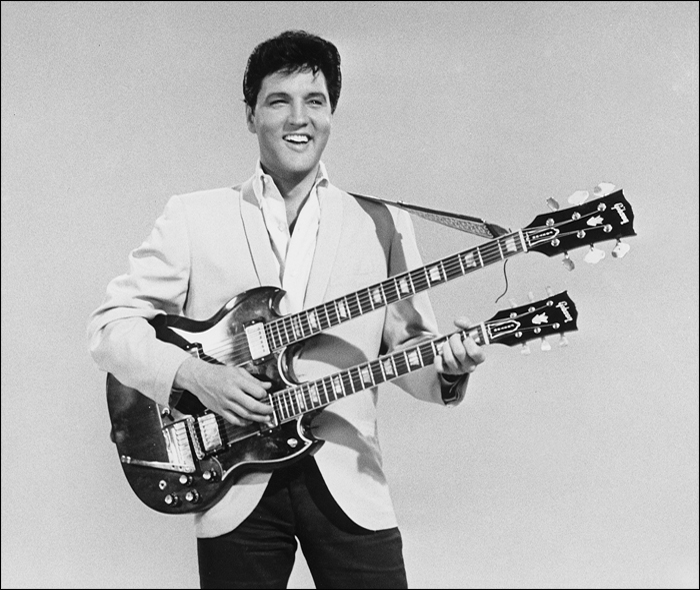 This red double bass is featured in many publicity shots for “Spinout.”

This stunning instrument is seen in lots of publicity shots and artwork for “Spinout,” but it’s only seen being played by Elvis very briefly, and toward the end, of the film. (His co-star, Jimmy Hawkins, is seen playing it earlier in the movie)

Elvis owned the Gibson after production wrapped, and it became one of his favorite guitars. This Gibson is part of the Graceland Archives.

This guitar is the one on everyone’s lips right now.

This Gibson Ebony Dove, which Elvis played on his groundbreaking “Aloha from Hawaii” special, will go on the auction block in next week’s Auction at Graceland. The guitar (and all items in the auction) is from a third-party collector; nothing in the Graceland Archives will ever go up for auction. Like in all previous auctions, Graceland will be bidding to try to bring these beloved Elvis artifacts home to Graceland.

In addition to “Aloha,” Elvis used this guitar during many concerts. The guitar features a Kenpo Karate Decal and Elvis’ name inlaid in the fingerboard. Elvis gave it to a fan in the front row of an Asheville, North Carolina concert, and that fan is the one who has consigned it to the Auction at Graceland.

Many of the items in the auction, including the guitar, are currently on display at the car museum here at Graceland, and they’ll be on display until the auction.

Learn more about all the guitars used or owned by Elvis.

Want to learn more about the King of Rock ‘n’ Roll? Visit Graceland and explore the life and career of Elvis Presley!