A rare and fascinating public moment occurred as Elvis Presley began a brief reflective backtrack to his musical roots from the stage of the Las Vegas Hilton when he saw someone in the audience holding a copy of the then recently released British compilation album, “The Sun Collection” (aka “The Sun Sessions” (RCA USA, 1976)). “Can I see that album for a second?” he asked the owner of the record as the eye-catching cover art held his attention, “I have never seen it before … The Sun Collection?”  he continued as he browsed some of its contents from the stage: “That’s the first five records I recorded!”.

This initial RCA UK vinyl album release was just as much a revelation as its subject’s coincidental discovery of it on that evening of December 13th, 1975. Primarily, it was the first official almost-comprehensive overview of the groundbreaking material crafted by Elvis exactly two decades before at the legendary Sun Studio in his hometown of Memphis, Tennessee. With the likes of “Harbor Lights”, “Tomorrow Night” (undubbed) and “When It Rains, It Really Pours” (out-take) – a mixture of blues and balladry – still unreleased at the time, this collection prominently underlined the sum of its stylistic achievements. It was the sound which spearheaded the infusion of country and western with rhythm and blues music (referred to as Rockabilly) and became a pioneering style of the Rock ‘n’ Roll movement of the mid-1950’s. Presley, along with lead guitarist Scotty Moore and bassist Bill Black transformed the sound of the genre with their upbeat interpretations: from Arthur ‘Big Boy’ Crudup’s “That’s All Right (Mama)” to Roy Brown’s “Good Rockin’ Tonight”, from Arthur Gunter’s “Baby, Let’s Play House” to Sydney Robin & The Shelton Brothers’ “Just Because”. It was the Sun Recording Company who had Presley under contract and released his early songs as singles masterminded by Sun owner and producer/engineer, Sam Phillips who was first made aware of Presley’s voice by Marion Keisker – the secretary of his Memphis Recording Service which was a subsidiary of the Sun Records label. It was here that Presley cut his first acetate demo soon after he graduated from Humes High School in 1953. From the date of his first ‘official’ recording session with Sun on July 5, 1954 through to RCA buying up his recording contract for an unprecedented sum of $35,000 in November, 1955, music history had already been made. 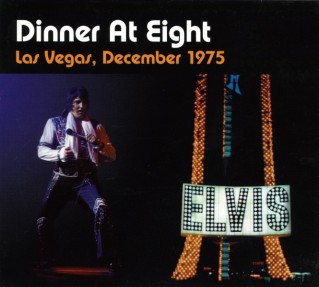 When Elvis Presley played his first ever engagement in Las Vegas in April/May, 1956 it stifled him – just as much as Elvis, aged 21 at the time, stifled it! This 2-week stay at the New Frontier Hotel was performed for mostly a sophisticated adult audience who were far from the biggest fans of Rock ‘n’ Roll music. However, by the time Elvis began his 14th engagement at the Hilton Hotel in December of 1975 he had already broken several attendance records in the main showroom which had begun in July, 1969. The times had changed, and so had the type of song set-list Elvis now presented to his audience. The show now featured a number of contemporary songs which included pop, gospel and big ballad arrangements, but his classic rock hits were always a staple of his concerts and whilst not being the most focused of performances, his audiences always appreciated his acknowledgement of them. By 1975 Elvis had already become the ultimate versatile showman and his sold-out concert tours that year (including Vegas seasons) continued to top the listings of the top best-selling artists to see perform live. When he saw that copy of ‘The Sun Collection’ album at the Dinner Show of December 13th, 1975 it considerably raised his interest enough for him to ask to see it. Perhaps it triggered a time for reflection, or at least just for a moment or two, which was spontaneously shared with his audience. Of all the 16 Sun tracks compiled on the album, it appeared that 3 of them were still on his performance set-list in 1975 – namely, “That’s All Right (Mama)”, “Mystery Train” and “Tryin’ To Get To You”. It’s a great testament to these groundbreaking classics, along with the vast majority of his musical repertoire, that they forever stand the test of time.

You can experience Elvis’ Las Vegas Dinner Show of 12/13/75, which includes that unique ‘Sun’ moment, on the Follow That Dream Collectors’ label CD entitled “Dinner At Eight”.