Posted on September 27, 2014 by Cosmic Dwellings 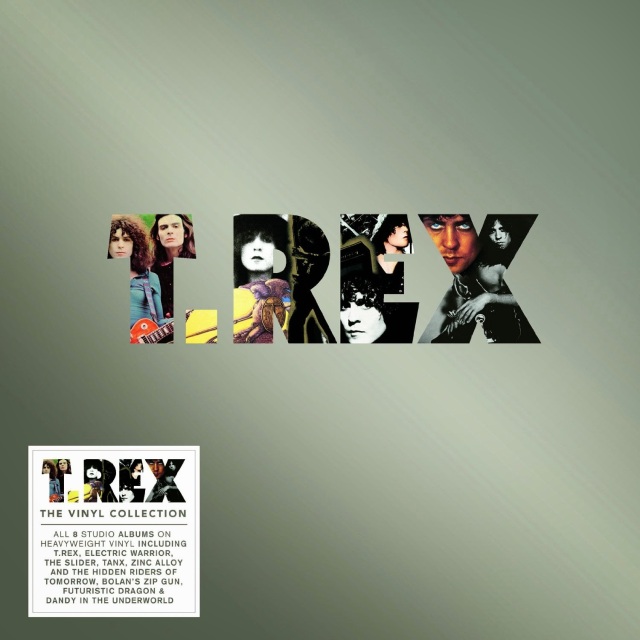 With the current comeback of the vinyl format, fans of T.Rex are in for a treat this Christmas withe Demon Music release on November 3rd, 2014 of “T.Rex: The Vinyl Collection”, an 8-album box set featuring ‘T.Rex’, ‘Electric Warrior’, ‘The Slider’, ‘Tanx’, ‘Zinc Alloy & The Hidden Riders of Tomorrow’, ‘Bolan’s Zip Gun’, ‘Futuristic Dragon’ and ‘Dandy In The Underworld’. Whether intended to replace scratched and worn original vinyl editions, to frame some of the most iconic, respected record sleeves for display, or simply to be reacquainted with the work of one of rock’s best-loved, most enduring legends, the T.Rex Box Set Collection is both stylish and affordable.

With 2 vinyl versions of T.Rex: The Vinyl Collection, a collector’s limited edition of 500 coloured vinyl sets which will be available through D2C, Demon’s online outlet (http://www.myplaydirect.com/t-rex) and a black vinyl set available through Amazon, this release is a must for Bolan fans. With an suggested retail price of £129.99 ($212.00) for the vinyl sets this collection of titles will also make the perfect Christmas gift choice. A ten-CD set,T. Rex: The Albums Collection will be released on the same date.

Marc Bolan was the first superstar of the Seventies. Part hippie mystic, part vintage Hollywood flash, he was a new kind of pop phenomenon, inspiring hysteria and hero-worship of a kind not seen since Beatlemania a decade earlier. At the height of his fame, between 1971 and 1973, his records sold in their millions – his book of poetry was a best-seller, too – and he was the most visible and controversial figure in pop. Amongst T. Rex’s biggest hits, which included 4 No. 1s, were Ride A White Swan, Hot Love, Get It On, Jeepster, Telegram Sam, Metal Guru, Children Of The Revolution, Solid Gold Easy Action and 20th Century Boy.

Unusually for music that’s now 40 years old, the work of Marc Bolan and T. Rex, much of it recorded with legendary record producer Tony Visconti, kicks and sparkles just as much in the 21st century. In recent years, several of his best-known songs have been used in high-profile advertising campaigns.

While best known for his extraordinary run of singles (11 Top 10 hits between 1970 and 1977) Bolan also released some of the best-selling and today most critically rated albums of the era. The Slider, released at his peak in July 1972, was quintessential T. Rex and the prelude to Born To Boogie, the full-length feature film Bolan documentary shot by ex-Beatle Ringo Starr. Its predecessor, Electric Warrior, is rated more highly still. A raw, mesmerizing blend of primal rock’n’roll, hard rock attack, blissed-out balladry, topped with some of the most memorable lyrics ever to appear on record, Warrior is now regarded as one of a small handful of truly definitive rock albums.

The eight original titles featured in the box are as follows: