Over forty years ago, a turning point in rock history took place, the 1967 Monterey Pop Festival. This three day concert packed with performances from some of the biggest names in music history, would be the epicenter for the “Summer of Love.”

A full two years before Woodstock, 200 thousand fans would experience an unparalleled event, during a year like no other, before or after. In 1967 our ears heard for the first time; the Jimi Hendrix Experience, Janis Joplin with Big Brother and the Holding company, Jefferson Airplane and many, many more musicians that would be known as the collective sound of the time.

Of course one of those new rising stars at the festival was our very own Grace Slick. Grace in celebration of the important anniversary has used here talents as a painter to share with us an intimate view that could only come from her.

In Grace’s painting “Monterey” she is telling a story from the performers perspective, by placing the back stage scene in the foreground. She has chosen a unique perspective that only a small group that was there experienced. It was a once in a lifetime meeting of most all of the top musical contemporaries of the day. With the intense tour and recording schedules of the time, to cross paths with just a couple performers of their status was extremely rare. In many cases this was the only time that some of these legendary stars would ever meet during their lives.

After the creating of this important work, Grace took a moment to put some of her thoughts about that time to words:

“Throughout history there have been delightful little blobs of collective hope.

For a couple of years in the late sixties, no matter what was going on in the world, our generation happily assumed that with love and education we could change outdated social systems.

One huge thing that we missed, 90% of the population is genetically imbued with sub mediocre reasoning skills. No matter how much you hug them or read to them, there’s no correcting stupid.”

Monterey – a celebration of youthful naiveté.

Grace Slick looks back 40+ years, to a concert no one will ever forget… 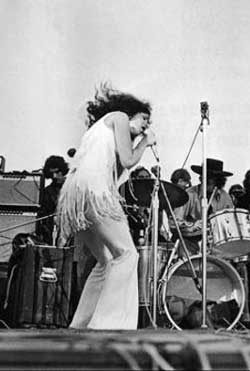 In Grace Slicks Own words:

“At the time (1969), A concert with ½ a million people was unheard of. To be honest we were blissfully unprepared and unmercifully hammered by the weather. As the painting shows, the audience had to slog around in the mud. Young people adapt to that kind of a mess better than old farts.

Saying goodbye on the last of three days, the clump of musicians on the stage is appreciating the audience and vice versa. Everything except murder is happening in the crowd – as it would in any gathering of that size.

I have taken the liberty of inserting some individuals who could not have been there, but maybe they were in spirit – Abraham, Buddha, Mohamed, Jesus, Adam & Eve, Alice in Wonderland, The White Rabbit, My daughter and Barack Obama.

For composition and space, I have simplified the stage gear and the sound towers. If it looks like a cartoon – it was.”