Posted on November 6, 2014 by Cosmic Dwellings

It was March 1971 when record producer Tony Visconti arrived in Los Angeles, he was there with Marc Bolan and T.Rex to work on some new tracks, including ‘Get It On’ that became the band’s next single. Tony takes up the story…

“I was walking down Sunset Boulevard, wearing shades and sweating in my t-shirt. I went to Tower Records; at the time it was the largest record shop in the world, where I heard Bowie’s ‘The Man Who Sold The World’ blaring out from the loudspeakers. In the middle of the almost empty store a sales clerk was playing ‘air bass’ to my bass part on ‘She Shook Me Cold’. I couldn’t resist it: ‘I’m Tony Visconti, the producer and bass player of that song.’ ‘No way!’ I had to show him my driver’s licence before he would believe me.”

Visconti and Marc Bolan were in LA to record with Howard Kaylan and Mark Volman who had been the singers in the Turtles, the band that had a world wide hit with ‘Happy Together’ in 1967. After leaving the Turtles they had to change their names to Flo and Eddie as contracturally their former record label owned their names!

According to Mark Volman, “Actually we first met Marc when he was on Fly Records with Tyrannosaurus Rex. He came to the US as an opening act for Flo and Eddie. So we hung out with him. When we toured the UK with Zappa we looked him up. He was doing things like ‘Seagull Woman’ I think and then he had ‘Hot Love’. We ended up recording a lot with Marc, we contributed the high voices, and T Rex became all that high voiced harmonies. We did ‘Electric Warrior’, ‘Jeepster’ etc and appeared on 10 or 12 of his records. Including ‘Bang A Gong’.”

‘Bang A Gong’ was what T.Rex’s single ‘Get it On’ was called in America as there was already an R&B single of that name and it was felt it would avoid confusion. Tony Visconti recalling the story of recording ‘Get It On’.

“Before going into the studio we rehearsed the new material at Howard Kaylan (Eddie)’s Laurel Canyon house. All his windows and doors were open and we could smell the orange trees that surround his pool. I’d never ever met anyone with a swimming pool in his back yard. Mickey Finn and Steve Currie staged a fake slow motion gunfight by the pool, which I filmed on my Super 8 cine camera, before we retired inside to routine the back-up vocals for a new song called, ‘Get It On’.
Rehearsing in such a lush house, close to a private swimming pool was a surreal experience. Marc was a prolific songwriter. He had a lined schoolbook chock-full of lyrics and chord symbols. He would open the book at the beginning of an album, and then when we had enough tracks recorded – say about 17 – he’d close the book. ‘Get It On’ was just one of about 50 or 60 he had in the book at the time.
When I first heard it, only the day before we recorded it, it sounded like a hit to me. The next day we drove what seemed like miles and miles (typical of distances in LA) to Wally Heider Studios and recorded ‘Get It On’ – the sunshine seemed unbearable to us, with our maggot-like complexions from grey London. Our engineer was a very helpful, and eager, Rik Pekkonin; I’d seen his name on many record covers. We did it in one evening, complete with overdubbed backing vocals from Flo and Eddie – we knew we had our next single.”

Back in London we were adding my string arrangement to ‘Cosmic Dancer’ in Trident Studios when a thought occurred to me. ‘Marc, you do realize that both the last two singles have strings on them and there are none on ‘Get It On’?’

He went pale on the spot. ‘Tony we must have them, can you write something?’ With the string players patiently sitting in their seats I quickly dictated the three notes the strings were to play on the chorus. Without a score to read from I simply pointed to them when they were meant to play the three notes and repeat them when necessary. They had to watch me carefully to stop playing the three notes because the repetition was different each chorus

The counterpoint to working on T. Rex was brought into even sharper focus in July with the release of ‘Get It On’; it was the beginning of T. Rextasy. Although the two big hits had catapulted Marc and the band up several rungs on the ladder, ‘Get It On’ took them to an altogether different place; it become universally the most popular T. Rex song. “

Finally a couple of pieces of trivia. The last line of ‘Get it On’, “Meanwhile, I’m still thinking…” was a nod to Chuck Berry’s song “Little Queenie,” which includes the same lyric and inflection. The saxophonist on the record is King Crimson’s Ian McDonald. We would also like to dispel a myth surrounding Rick Wakeman playing piano on this record. The pianist was in fact Blue Weaver who had been in Amen Corner and Fairweather and was soon to join the Strawbs; Blue was later in the Bee Gees band for many years. He told us this week. “Yes it’s true although, it’s been quoted that Rick played, but Tony Visconti said it was me and I also did the piano gliss on ‘Telegram Sam’. The greatest kick was watching Elton mime to my part on TOTP.”

The extracts by Tony Visconti come from his book, Tony Visconti: The Autobiography: Bowie, Bolan and the Brooklyn Boy 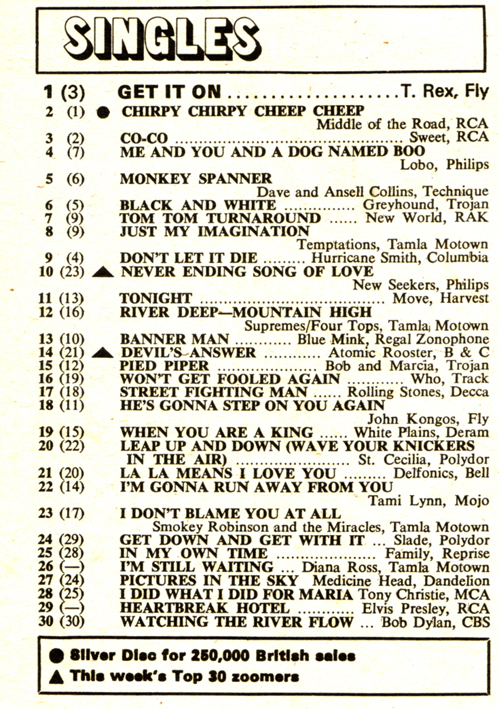