“WHEN YOU ROLL THE DICE THERE’S A LESSON LEARNT –
IF YOU PLAY WITH FIRE, WELL YOU’RE GONNA GET BURNT!”
–  ‘Irate’ song lyrics/music Copyright © Laura Wilde/Brian Canham.

One could almost be correct in their observation that most performers possibly approach every gig as some kind of ‘prizefight’. As a rule, the ‘prizefighter’ is more than willing to beat down any obstacle in their way, or at least keep it under some manageable control. Sometimes, the circling audience can provide that obstacle and take on the presence of a formidable opponent: baying for the blood and guts of sheer entertainment. Sometimes, it may be an unforeseen element, or circumstance, that appears to be working against the ‘staged prizefighter’. The ‘unforeseen’ which somehow evokes a blind spot or disguise within the realm of its murky presence. In this case,  the unforeseen lay in wait patiently somewhere between the striking of a power chord on the electric guitar and the eye of the element that captured the moment…

The dice had already been rolled, the fire ignited and the spotlights now descending upon, and saturating, the falling locks of blonde. The guitar’s burning emotion was crackling upon the atmosphere, continuing its search for an unspoilt and textured landscape. Then it happened: the cold sting from the metallic object flying past her eyes; the fleeting glint caught in the lights. Then it appeared: oozing like a cherry red wine, a glistening clot of human ‘crude’. Her thoughts trying to numb the pain; all emotion reserved for the remainder of the song. The lights molesting the drama they forever sought in the liquid appendage seeping on the bridge of her nose. A spotlight or two had shone on the expressions among the ‘ordinary’ faces in the audience, trying to capture every possible concern. Tonight’s show had been given freely, no charge; the blood flowed freely too, but could have been at a potentially high cost to its owner. Eventually, the set was brought to its ‘uncomfortable’ climax followed by the equally uncomfortable sting of the mopping implement soaking up its potent palette. The instigator of this bloody inconvenience was still dangling around her neck, smiling its charm. It was truly the unforeseen enemy obstacle on this night, on this field of musical combat steeped in the dazzling lights of Hollywood nights. But, it was her professionalism which shone more than the chained necklace; a professionalism that bathed freely in the deception of its surroundings.

The healing process of a resurrection began with a Doctor’s visit for this hard-working performer of rock-oriented songs; this ‘rookie’ of the US touring circuit who was gradually cutting into the musical fabric of the place she now called home. The next stop after the Doctor’s office would be the Arkansas Music Pavilion in Fayetteville to soak up more of that ‘prize-fighting’ experience of blistered fingers and thumbs and potential bloody noses. It is hard work being a genuine musician. But, the next stop was also a ride on the continuing “Great White Buffalo” tour supporting the legendary Ted Nugent. Therefore, all this blood, sweat and tears being wrung out of every ounce of rock ‘n’ roll was not totally void of its perks… or its prizes as Laura went on to win Rock Over America “Best New Female Rock Artist 2012” and Vegas Rocks “Best New Female Artist 2013” awards! 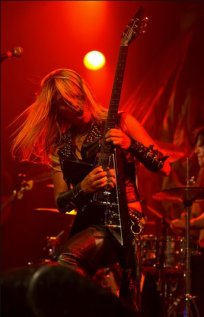 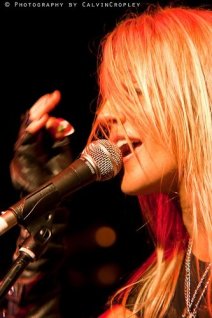 A glorious addition to your CD/mp3 collection is Laura Wilde’s “Sold My Soul” album. It’s a 21st Century take on a lot of the music which influenced her growing up years and has undoubtedly been in her family’s vinyl/cassette archives throughout those years. The ‘retro rock’ listener won’t be disappointed with Laura’s self-penned homages which blend the ingredients of Glam Rock, Glam Punk, Hard Rock and Pop mixed with a healthy dose of Metal and Soft Metal flavourings. It’s one big cool ride along a hot furnace of open road which commences with the 10-second intro of a roaring Harley-Davidson kick-starting a pulsating ‘heartbeat’ which segues into “ALL ALONE” – the first track which, incidentally, is the first song Laura ever wrote when she was a teenager and subsequently is her first single from the album. It’s a really good Punk-infused Pop song featuring crunching guitars amid a breathless recitation and an overall frantic production. “SOLD MY SOUL” – the gritty and catchy title track is a winner with its shades of Bolan’s “20th Century Boy” guitar groove – it’s Glam Rock at its updated best as Laura takes us on a semi-autobiographical cross-country career-developing journey Stateside. “FREEEK!” – the throbbing baseline and ‘vox’ effects imbues the dark undertones in conjunction with another catchy electric guitar groove. The interesting spelling of the title is confirmed within the screech of its chorus. “IRATE” – guitars thrash across a dark landscape of attitude and a punk chorus that’s filled with angst and irritation.  “Irate” bellows with wordplay that’s singed with a fuming smoke and features “a guitar solo that bleeds along the highway of an angry heart!” (see “Highway To An Angry Heart” link below in this article). “BACK SEAT” – a fine commercial combination of Pop/Rock which became Laura’s follow-up single to “All Alone” and was one of the very first music videos Laura made. Throbbing base and fuzz guitar combine to great effect. “FOR YOU” – a major highlight of the album! The song is delivered with an incessant underlying angst which simply oozes from the words ‘creep’ and ‘sleaze’. Please note the ‘Explicit’ label attached to this song too. Nevertheless, it’s a brilliant delivery in performance and production as you’re able to experience the whole drama of the narrative via the song’s accompanying video (see link below in this article). A beautiful acoustic guitar pours its melancholy into the darkness of this atmospheric gem which also features another shining performance by Laura on the lead electric solo. “ANYTHING GOES” – a riveting glam rock sing-a-long with shades of Suzi Quatro equipped with Na-Na-Na-Na-Na’s thrown in for good measure. One of those songs which bestows the feeling of youth upon you. “CLASSICAL GUITAR STAR” –  a beautiful work of art. A yearning piece of musical drama unfolds for the adulation of the title character. Laura channels the young girl in this wondrous world of mystique. It’s a teenage angst that resonates for all and the beautiful musicianship culminates in a tear-inducing ending. “NOTHING BACK” – the punk undertones are delivered within a ‘machine gun’ style chorus which rocks straight in yer face! “LOVE BUYER” – more flashes of Suzi Quatro style phrasing here with a catchy chorus once again and a narrative that depicts the title character’s devious endeavour to pick up several ‘bargains’. “ANGEL” – rounds out the album with its fuzzing bass and electric solo searing through the ‘vox’ effects of combined punk and new wave pop textures. So, overall we have a brilliant debut by this young rocker still in her mid-20’s and with a great inspiring feel for classic rock which caters to all ages. “Sold My Soul” is vibrant, mostly upbeat and comes highly -recommended as a feel good listen paying homage to several sub-genres of rock and pop music. If only the album was made available in a warm vinly offering, it makes you crave for the nostalgia that inspired it. You can almost hear the flourishing touches of The Ramones and The Clash along with T.Rex, AC/DC and The Runaways! We eagerly anticipate the follow-up album* by Laura Wilde which is currently in the works… 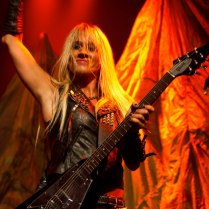 The following are 2 music links (Spotify and youtube) to the song “IRATE”. It was Laura’s guitar solo in this song which inspired a quote from writer Tony G. Marshall which consequently inspired the creation of the lyrics of his own “Highway To An Angry Heart” (see below after “Irate” youtube link): 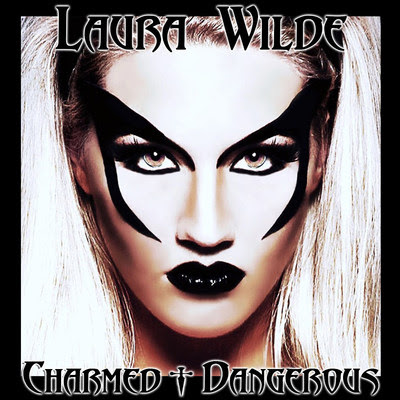 Also included on Laura’s website, at the following link,
is a unique database record of all her shows : 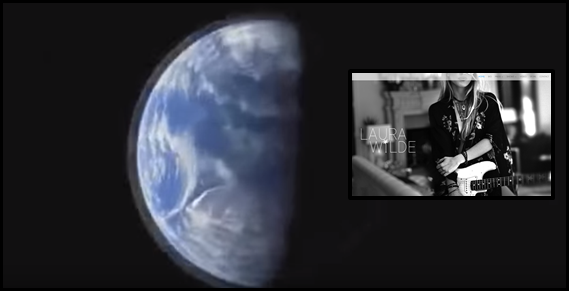 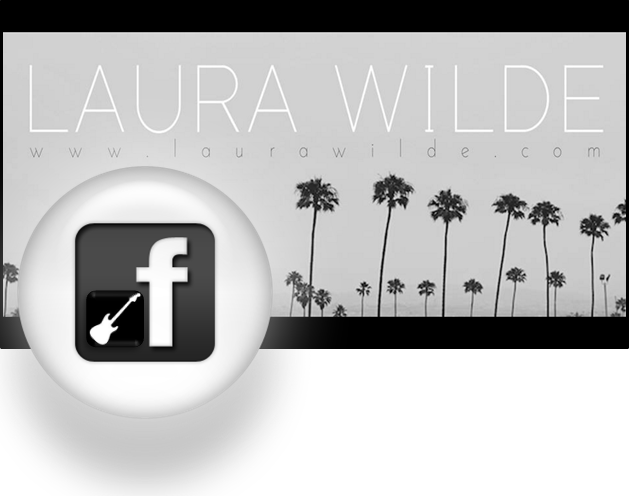